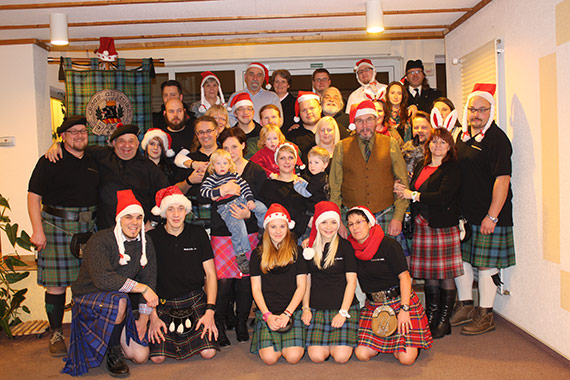 The year 2012 was a succesful and exciting year for us. In addition to many events – especially our Scottish Days / Highland Games 2012 – a delegation visited  the 50th. Anniversary 2012 from the Clan MacLaren Society in Scotland. At the same time to this memorable event starts the Clan Games in Lochearnhead. We supported succesful the Clan MacLaren in the „Tug of War“ Likewise, Helga and Michael were married this  weekend in the Church of Balquhidder and a few weeks later we start to smithing our clan sword in the Chapel of the miners in Muttental. We welcome a large number of new members and so on … as already written … an exciting year!

List’ning, the doors an‘ winnocks rattle,
I thought me on the ourie cattle,
Or silly sheep, wha bide this brattle
O‘ winter war,
And thro‘ the drift, deep-lairing, sprattle,
Beneath a scar.